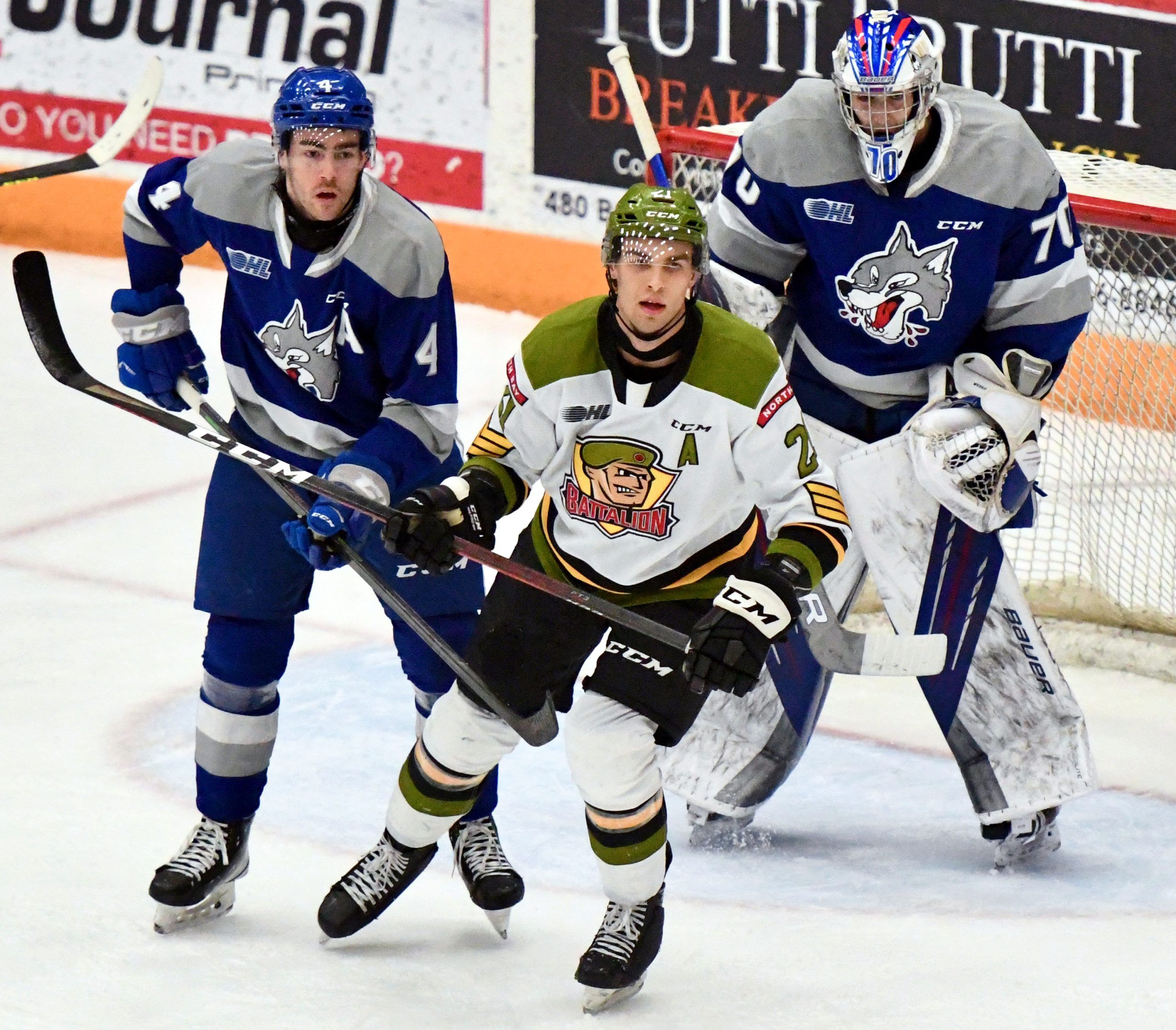 SUDBURY, Ont. — Kyle Jackson scored two goals, including an empty-netter, and added an assist as the North Bay Battalion defeated the Sudbury Wolves 6-2 Sunday in the opener of an Ontario Hockey League home-and-home series.

Matvey Petrov had one goal and two assists, and Kyle McDonald, Mitchell Russell and Dalyn Wakely each scored as North Bay improved its won-lost-extended record to 29-17-6 for 64 points, second in the Central Division, four points behind the Mississauga Steelheads, who fell 3-1 to the visiting Ottawa 67’s.

Goaltender Joe Vrbetic made 26 saves before a crowd of 2,159 as the Battalion gained a split of four consecutive road games after losing two in a row.

The game was the first of four against Sudbury in a stretch of five. The Wolves visit North Bay at 7 p.m. Thursday.

Overage goaltender Mitchell Weeks, who made a 16th straight start, faced 40 shots, allowing five goals before being pulled initially for an extra skater with 8:16 to play.

The Battalion, which led 3-2 after 40 minutes, got breathing room when Jackson scored 51 seconds into the third period, tipping a right-point shot by Grayson Ladd. Coe also assisted.

Wakely registered his 14th goal of the season when he put the puck behind Weeks from a sharp angle to the goaltender’s left at 11:16 on assists by Owen Outwater and Nic Sima, giving the Troops a 5-2 lead.

Sudbury coach Craig Duncanson lifted Weeks for a sixth attacker at 11:44, and the goaltender spent 4:01 of the remaining 8:16 on the bench, including when Jackson chopped his 20th goal into an empty net at 17:08.

After the teams split two first-period goals, McDonald connected at 3:32 of the second frame, beating Weeks high to the blocker side off a rush. Nikita Tarasevich and Ty Nelson drew assists on McDonald’s 28th goal of the campaign, his 11th in 17 games since joining the Troops from the Windsor Spitfires.

Russell struck for his 30th goal, tied for the team lead with Coe and Petrov, on the power play at 18:48 off a pass from Coe. Petrov had the second assist on what proved to be the winner.

Larmand opened the scoring at 10:22 of the first period, converting a quick pass from the end boards from Ryan Smith. Nick DeGrazia also was credited with an assist.

The Battalion dominated the period, winning 16 of 23 faceoffs and forging a 20-9 edge in shots, but it was the last of each that produced the tying goal, by Petrov at 19:56. Jackson won a draw at the right dot, and Petrov rifled the rubber from the inner edge of the circle for his 30th goal.

Weeks stymied every Battalion assault to that point, including during the only two power plays of the period. He denied Alexander Lukin in the slot at 10:00 and parried Paul Christopoulos on a rush up the middle at 12:08 before Coe was foiled on a solid chance in the 14th minute.

BATTALION BULLETS: The Battalion is 5-2-1 against the Wolves, including 1-1-1 at the Sudbury Community Arena … Memorial Gardens will return to full capacity Thursday night, and there will be no checking of covid vaccination status. Masks will continue to be required in the arena … The Battalion went 9-2-0 in February … In 236 games, Coe has 82 goals and 116 assists for 198 points, tied with Brett McKenzie for eighth place in franchise history. Coe’s assist total is fifth all-time, one more than that of Luke Lynes. In eight games against Sudbury, Coe has five goals and 11 assists for 16 points … McDonald has a nine-game points streak in which he has nine goals and five assists for 14 points … In seven games against Sudbury, Russell has three goals and 10 assists for 13 points … Ladd played his 200th OHL game, his 21st since a Jan. 5 trade from Windsor. He was a first-round choice in the 2017 OHL Priority Selection by the Kitchener Rangers, for whom he played 22 games … Christopoulos, a second-round choice in 2019, played his 100th game … The Battalion went 1-for-3 on the power play. Sudbury was 0-for-4 … North Bay was without Tnias Mathurin and Liam Arnsby.