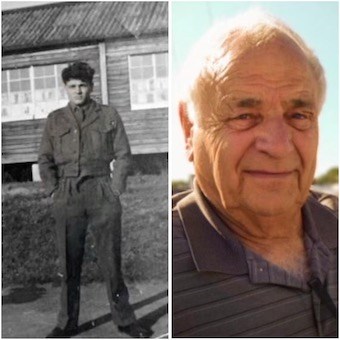 It is with heavy hearts that we announce the sudden passing of Robert J Barnes ‘Bob’ on Saturday, March 5, 2022.

Bob leaves behind his best friend and love of his life of over 60 years, Veronica.  Bob was the proud father of his three children Wayne (Sheila), Bobbie-Jo (Mark) and Micheal (Catalina).  Bob dearly loved being a grandad and will be sorely missed by his grandchildren, Carson, Keila, Yvonne, Cameron and Evan. He was also a special uncle to Phillip, Andrea, late Russell, Richard and Susan.

Bob was predeceased by his parents Samuel and Rose Barnes, of Birmingham, England as well as his brothers and sister Ron, Gordon, Phyllis (late Fred) and Jim (Kay).  He will be fondly remembered by family across England and Canada.

Bob’s favourite place was puttering in his garage. He adored his family and took great pride in helping them with anything that needed doing. He was a true craftsman who could build or fix anything.  There was never a job that Bob couldn’t tackle.  His love for his family will be enshrined in the legacy of his craftsmanship that will always surround us. During hockey season Bob was an avid fan of the Soo Greyhounds and could be seen in section 105 with his son Wayne or grandson Carson.

Bob was also known for his great sense of humour, his dry British wit, and endless supply of one line “Bob” jokes.  He was genuine, kind and gentle with everyone he met and was the life of the party.  He lived life to the fullest and was the light of all family gatherings, and he will be missed dearly by those who had pleasure of knowing him. Born in 1939 in Birmingham England, Bob lived through WW2 and served in the British Army stationed in post war Germany, where he made many lifelong friends and memories. He moved to Canada with his young bride in the 1960s to start a new adventure and was fortunate to meet many great friends over the decades while working at the Tube Mill, F.J. Davey Home and Algoma University.

Bob loved spending his winters in Florida and whiling away the summer months at his camp in Brimley Michigan. Bob held dear his friendship with the Whealy family, his neighbours at Brimley.  We will cherish the memories of time spent with him sitting on the deck playing long games of scrabble while listening to Neil Diamond, BBQs, Willoughby’s family breakfasts, and the annual 4th of July celebrations.

Everything Bob did was for his family.  He set the bar high for what it meant to be a husband, father, grandad and friend.  He took care of all of us and had a special relationship with each of his grandkids.  He leaves us with great memories.

A Celebration of Life will be held at a later date. Thank you to the caring staff in Emergency and ICU at the Sault Area Hospital and the ICU staff at Health Sciences North in Sudbury.  Special thank you to ICU nurses Peggy and Tracy in Sudbury. In lieu of flowers, memorial contributions to Algoma University https://algomau.ca/giving/how-to-give/ would be appreciated by the family.