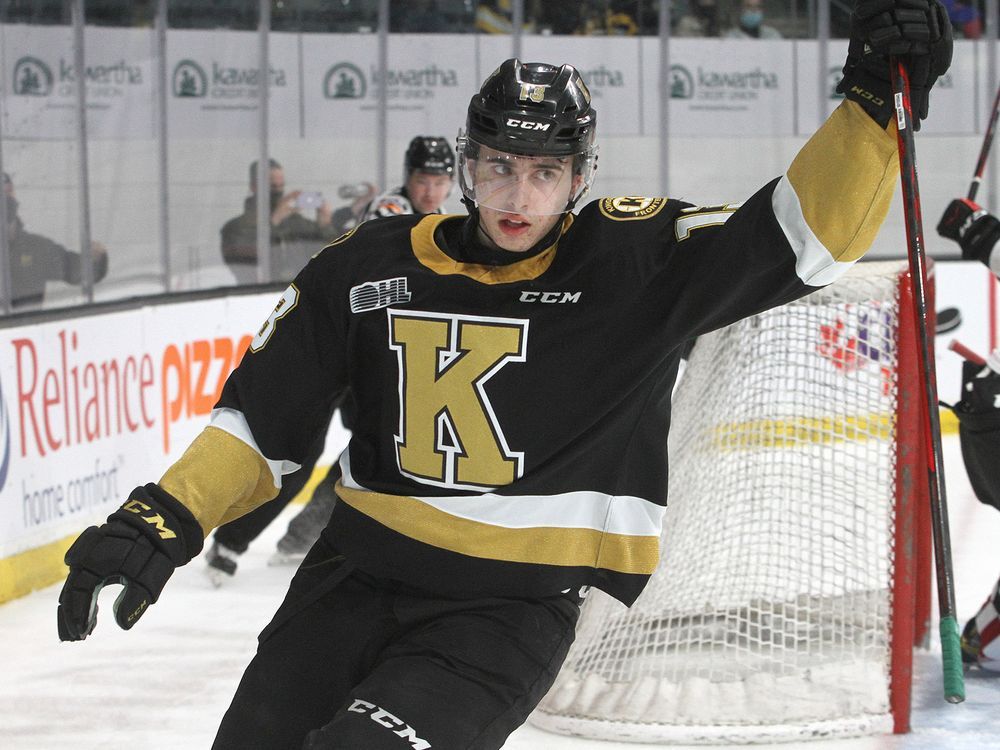 Kingston Frontenacs forward Francesco Arcuri scored at 16:36 of the first overtime period to give the Frontenacs a 5-4 win over the North Bay Battalion and a split in the first two games of their Ontario Hockey League’s Eastern Conference semifinal played in North Bay.

Arcuri skated between four North Bay defenders in the neutral zone and his wrist shot from the left side just inside the blue line went underneath the trapper of Battalion goalie Dom DiVincentis. It was Arcuri’s fourth goal of the post-season.

It was Kingston’s second overtime victory in a week. Last Sunday, Shane Wright scored in overtime for a 5-4 win that eliminated the Oshawa Generals in their quarter-final in six games.

Also scoring for Kingston were Matthew Soto with a pair, Jacob Murray and Martin Chromiak. Arcuri and defenceman Lucas Peric had a pair of assists each.

Soto’s second goal of the game and of the playoffs gave Kingston an early third-period 4-3 lead, but Petrov scored on a one-timer on a power play at 5:35 to tie the game, 4-4.

The Battalion outshot the Frontenacs 14-9 in the third period and each team had five shots in the overtime. Overall, North Bay outshot Kingston 51-35.

North Bay, which fell behind 3-0 in the opening 8:02 of the first period and was trailing 3-1 heading into the second, got a goal early in the middle frame from Coe and then Romani tied the game, 3-3, at 6:42. Romani scored after Dalyn Wakely lifted Murray’s stick and got the puck to his teammate, who was in alone on Kingston goaltender Leevi Merilainin.

North Bay dominated the second period, outshooting Kingston 19-7, and Merilainen was called upon to make some big saves.

The move seemed to pay off early as Kingston got off to a quick first-period start on goals from Murray, Soto and Chromiak.

On the first goal, just past the three-minute mark, Murray, pinching in from the point, went forehand to backhand and put the puck through North Bay starting goalie Joe Vrbetic’s legs.

At 7:45, Soto converted a rebound for his first career playoff goal, and Chromiak scored 17 seconds later as he deked out a pair a Battalion defenders and also Vrbetic. That was the end of Vrbetic’s afternoon as he was replaced by DiVincentis.

The Battalion got a goal back from Russell with seven minutes left in the period.

After Kingston got the first six shots of the game against North Bay, the Battalion battled back and got some good scoring chances, but Merilainen made some good cross-crease saves to hold the first-period lead.

Wisdom received a four-minute high-sticking penalty late in the period when he got his stick up on the Battalion’s Liam Armsby. Kingston was able to kill off the penalties, but Coe scored from in close three seconds after the penalty expired to make it 3-2 early in the second period.