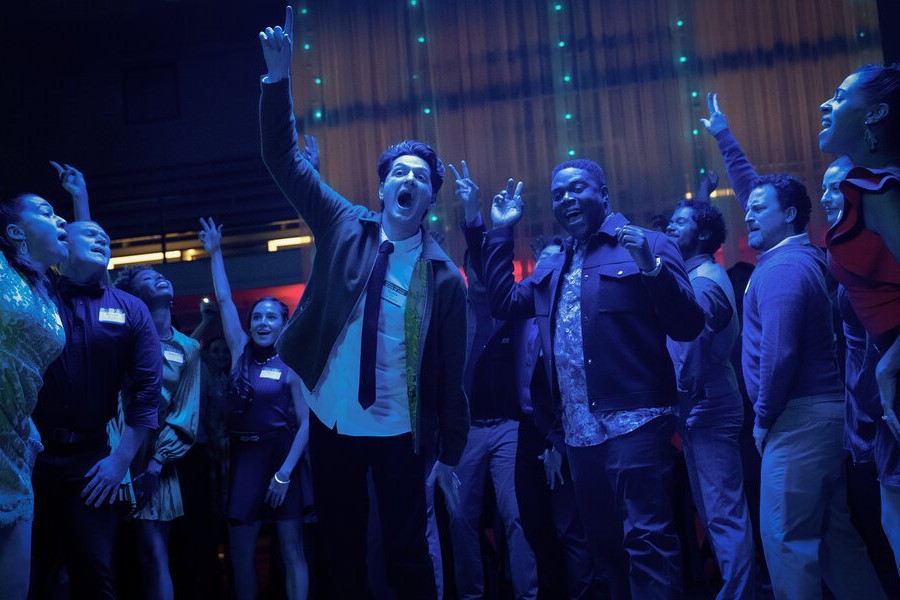 Sam Richardson, Tiffany Haddish and others puzzle out a murder at a high-school reunion in this genre-shifting new series

I’ve been watching a lot of television lately – yes, I know, we all have – and The Afterparty feels like the most fun I’ve had in like a thousand years. It’s fast, it’s clever, it’s endlessly inventive and it’s just so damn pleasurable. Everything sucks right now; The Afterparty does not.

Produced by Phil Lord and Christopher Miller, with all eight episodes directed by Miller, The Afterparty is a comedy that takes place over one long night in the cliffside home of a megastar named Xavier (Dave Franco), who has just been found dead on the rocks below his house.

There are signs of a struggle, indicating this wasn’t an accident; rookie detective Danner (Tiffany Haddish) decides to prove herself by cracking the case before her hotshot superior can reach the scene. And so, while her partner (John Early) buys her some time, she sits down with Xavier’s former classmates, one by one, to hear their version of what went down that night – each “mind movie” presented as a different genre.

The first three episodes focus on Aniq (Sam Richardson), an escape-room designer who’s been carrying a torch for art teacher Zoë (Zoë Chao) since they were lab partners in chem class; Brett (Ike Barenholtz), who actually married Zoë and had a daughter with her before wrecking their relationship; and Yasper (Ben Schwartz), Aniq’s best friend, who used to be in a ska band with Xavier back in the day and hoped to reconnect with his famous friend at the reunion.

Lord and Miller originally developed The Afterparty as a feature film, and like so many projects it was reconfigured as a multi-part series once a streamer came calling. But this is one example where the expanded running time and stop-start nature of episodic television really does serve the story. Rather than speeding through a handful of stylistically contrasting flashbacks, each episode can be its own thing – a romance, a muscleheaded action movie, a paranoid thriller, a teen house-party comedy or even a full-on musical – while the master narrative plays out in the background.

The result is a loose, funny character comedy that keeps doubling back on itself, using the genre references to illuminate its characters, build ingenious comic set pieces and spin a properly intriguing mystery. Think Knives Out, but with deliriously catchy musical numbers.

The cast is a murderer’s row of funny people; this is the sort of project where reliable scene-stealers like Broad City’s Ilana Glazer, Stath Lets Flats’ Jamie Demetriou and The Good Place’s Tiya Sircar can float around like ringers while Richardson, Schwartz and Chao find room for sweet interactions in all the confusion and panic and Haddish plays endless variations on bemused irritation.

Like all of Lord and Miller’s work – which stretches from Clone High and the 21 Jump Street and LEGO movies to the triumphs of Into The Spider-Verse and The Mitchells Vs. The Machines – The Afterparty has a welcoming, open heart; it really loves its hapless characters, understanding how we all see ourselves as the heroes of our own stories. There’s even a kindness in the way they treat Franco’s Xavier, who could have been a one-joke doofus but gets to show tiny flickers of self-awareness throughout the flashbacks. Lord and Miller are cynical about showbiz culture, and get a lot of mileage out of perfectly calibrated glimpses of Xander’s preposterous career, but we get to understand who the guy is, and why he’s happy to sell out the way he does.

They also just love giving talented people the opportunity to be very, very silly. And on that level The Afterparty works like Pop Rocks, each episode bursting with oddball line readings, goofy bits of business and inventive sight gags that keep the comic momentum going, no matter what genre has taken over the episode. Miller seeds jokes that won’t pay off for hours – but when they do, that moment is perfectly delivered.

Keep an eye on Aniq’s flaming Jello shots. You’ll see what I mean.