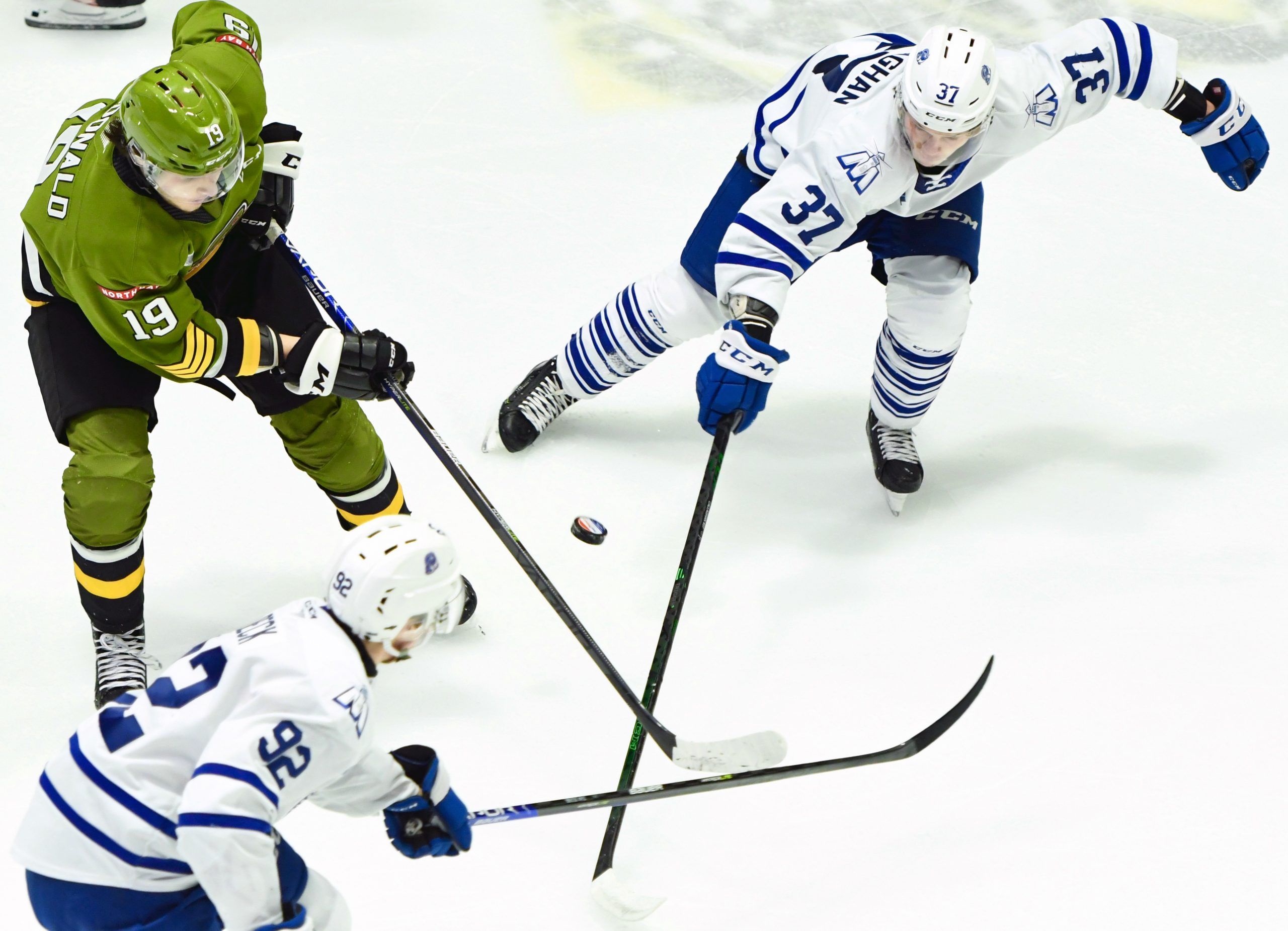 Kasper Larsen scored at 18:12 of the third period to give the Mississauga Steelheads a 3-2 victory Thursday night over the North Bay Battalion, handing the Troops a fourth straight Ontario Hockey League loss in the opener of a home-and-home series.

Owen Beck and Charlie Callaghan provided the other goals, while goaltender Roman Basran faced 19 shots as Mississauga moved its won-lost-extended record to 25-8-4 for 54 points atop the Central Division, Eastern Conference and league.

Dalyn Wakely and Brandon Coe scored for North Bay, and goaltender Joe Vrbetic contributed 38 saves in a sterling effort in a Memorial Gardens without spectators. The Battalion is 19-14-6 for 44 points, second in the division.

The teams meet again at 7 p.m. Friday at the Paramount Fine Foods Centre.

The game provided several oddities, including a disallowed goal by Ty Nelson at 6:58 of the final period when referee Mike Marley went to video review for a second time in the contest to confirm that the puck had broken into two pieces with only one entering the net above Basran’s right shoulder.

“When Bill Houlder sees something new for the first time, you know it doesn’t happen very often, and that was the case with that one,” said coach Ryan Oulahen. “The whole puck needs to go in the net, and it’s pretty tough, when the puck breaks in half, for it to all go in the net.”

The game was penalty-free before the Battalion was assessed the only two penalties, a pair of minors in the last 10 minutes, both of which were killed, before defenceman Larsen lobbed a screened right-point shot over Vrbetic’s blocker off an indirect pass off the right boards from James Hardie. Luca DelBelBelluz had the other assist.

The teams traded second-period goals, with Callaghan giving Mississauga a 2-0 lead at 2:43 when he redirected a right-point shot by Evan Brand.

Wakely replied at 6:04, taking a pass from deep on the right side from Owen Outwater and skating across the goalmouth to backhand the puck high into the net. Marley inexplicably signaled no goal and went to an extended video review before the tally was verified. Nic Sima had the other assist on Wakely’s 10th goal of the season.

Wakely was foiled in alone on Basran in the sixth minute, and Basran robbed Coe with the left pad on a solo chance in the 17th before the overager tied it 28 seconds into the third period with his team-leading 26th goal, assisted by Mitchell Russell and Owen Van Steensel. Coe went to the net off the right wing and slipped a backhander past Basran.

Beck opened the scoring at 13:52 of the first period, dishing the puck to Zander Veccia on the right side on a rush across the blue line, driving through the slot and tipping a return feed inside the left post. Zakary Lavoie had the other assist on Beck’s 15th goal, tied with Beau Jelsma of the Barrie Colts for first among rookies.

Basran denied Russell on a goalmouth setup from Coe, who circled the net and emerged on the left wing, in the third minute, and snagged Coe’s shot at 17:52 after he wove his way alone in front.

BATTALION BULLETS: It was the teams’ fifth of 10 games, with the Battalion having a record of 2-3-0. A postponed game originally set for Jan. 13 at North Bay has yet to be rescheduled … In 226 career games, Coe has 78 goals and 104 assists for 182 points, tied with Jay McClement for 11th place in franchise history … In five games against Mississauga, Russell has six goals and five assists for 11 points … The Battalion, which dressed 11 forwards and seven defencemen, scratched Liam Arnsby, Matvey Petrov, Kyle Jackson and Dom DiVincentiis … Goaltender DiVincentiis was struck in the head by Danil Gushchin of the Niagara IceDogs in a 3-2 road loss via shootout Tuesday night. Gushchin has been suspended indefinitely … Vrbetic was backed up by Owen Wray, called up from the affiliated junior A Powassan Voodoos of the Northern Ontario Junior Hockey League … Kyle McDonald returned to the Battalion lineup from a four-game suspension issued after he received a major and game misconduct for a check from behind Jan. 16 against visiting Barrie … Brendan Kane was the other referee.