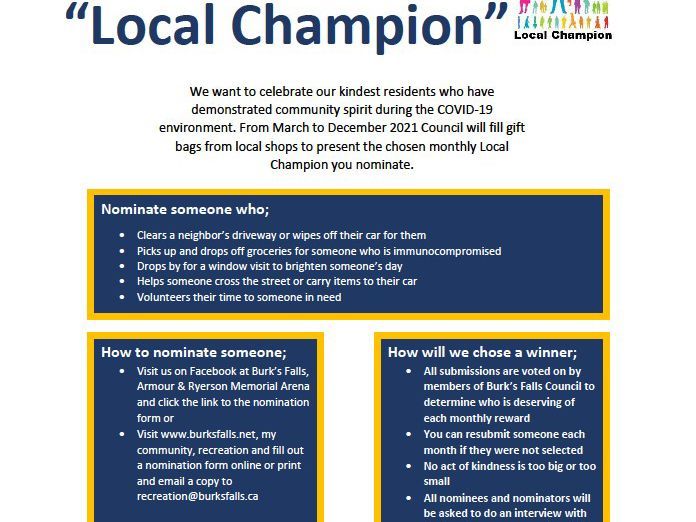 An 82-year-old resident of Almaguin Manor in Burk’s Falls is the Local Champion for December.

Marjory Elliott was recognized for the work she does at the Manor by walking her neighbours’ dogs and helping with their laundry.

The dog walks take anywhere from 20 to 30 minutes, although she only walks one dog at a time.

Her apartment is close to the laundry facility at Almaguin Manor and Elliott says it’s nothing for her to step out of her apartment and help someone fold their clothes or put clothing in the washer and dryer.

Elliott has been helping her Manor neighbours since moving into the building about two years ago.

The dog walking began with her approaching her neighbours.

“I just asked if I could take their dog for a walk and they could then sit down for a short while and take a break,” Elliott said.

Elliott told The Nugget her neighbours are grateful for her help and she doesn’t mind helping out when she can.

“I enjoy every bit of it and it helps keep me busy, too,” she said.

Elliott considers herself fortunate to remain active and part of her activity includes taking regular walks to downtown Burk’s Falls from the Manor, which takes about 15 minutes.

Elliott will also help neighbours in the hallway if she sees them struggling.

She will walk with them along the hallway and also outdoors.

Burk’s Falls recognizes a Local Champion each month from the municipality, Armour and Ryerson who volunteer in some way to make the area a better place to live.

The recipient is awarded a $100 gift basket made up of merchandise from local businesses.

Under the program, residents would nominate a worthy candidate and town council then selected each month’s recipient from a list of names.

Elliott doesn’t know who nominated her and appreciates the gesture although she doesn’t help out for the sake of being recognized for her work.

It’s something she enjoys and will keep doing.

Burk’s Falls council ran the Local Champion program for 10 months during 2021 because it was looking for a way to draw attention to the unsung volunteers who just go about helping out whenever they can.

Council has not indicated if it will renew the program for 2022.