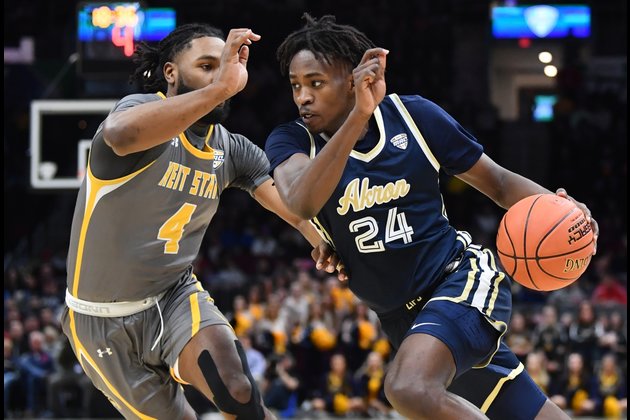 Enrique Freeman scored 23 points and grabbed eight rebounds Saturday night to lead fourth-seeded Akron to its eighth straight win, 75-55 over second-seeded Kent State in the final of the Mid-American Conference tournament in Cleveland.

San Diego State missed two scoring opportunities in the final 10 seconds, sending top seed Boise State to a 53-52 win in the Mountain West tournament final in Las Vegas. Tyson Degenhart hit a jumper with 2:20 left in the second half to give Boise State (27-7) a 53-50 lead, but San Diego State’s Matt Bradley responded with a basket at the 1:51 mark to cut the lead to one. But Bradley, who led all scorers with 17, missed a jumper and a layup with eight seconds left, and Trey Pulliam missed a jumper with one second left. Degenhart topped the Broncos with 13 points. The third-seeded Aztecs fell to 23-8.

Vermont walloped UMBC 82-43 in Burlington, Vt., to win the America East title, sending the Catamounts to the NCAA Tournament for the first time since 2019. The top-seeded Catamounts (28-5) were led by Ryan Davis, the unanimous league player of the year, who scored 20 points and grabbed five rebounds. With 10 points, Darnell Rogers was the only player to reach double figures for UMBC (18-14), which shot just 27.8 percent from the field.

Top-seeded Norfolk State (24-6) ended an impressive run by Coppin State (9-23) with a 72-57 victory in the MEAC tournament final in Norfolk, Va. Joe Bryant Jr. scored a game-high 23 points and Jalen Hawkins added 17 for the Spartans, who won a First Four game in last season’s NCAA Tournament before losing to No. 1 seed Gonzaga in the first round.